When Abaana built New Life Homes there were a few older street children who were determined to persevere in their education and requested help.  These boys were too old to attend Primary School and therefore stay in our homes, so we found them places at Grace High School where they could board.

Meet two of the boys: 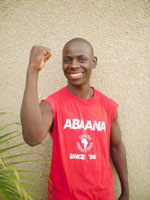 My name is John Paul Kisitu and I am 18 years old.  I used to live in Najjanankumbia near Kampala with my father and stepmother.  My step mother treated me differently compared to her own children in the family.

I used to do all the housework and was beaten if I didn’t do the work.  I found it difficult to go to school and do the jobs requested of me by my stepmother but I persisted until I finished Primary seven.   Life became really tough at home and I decided it would be better to live on the streets than suffer the abuse at home.

I spent one year and half struggling with street life.  I did all sorts of stupid things to survive;  drug abuse, theft, especially stealing phones and money from people.  I thought that I was making money to survive but it was dirty money so I decided to get a job.  I was able to get a job helping a builder, carry brick, cement and other tasks.

Night time was the hardest time of the day as I was so tired but I couldn’t sleep in fear of the city council security that used to take us away from the streets or from the other street kids who would burn us while we slept for money.  It was also very cold and I had no secure place to sleep I only had the verandas, under trees or in the tranches.

Getting food was a miracle as I would go to dust bins, especially those near restaurants and markets because these are places we expected to find some food wastes, where I sometimes found scraps.  I really wanted to leave the streets and thought through singing and playing football I would get someone to support me but time passed and my hopes reduced day by day, until I attended Street Reach a program run by Abaana.

In 2007 I was given the opportunity to leave the streets and to go and live at Abaana’s rehabilitation homes.  Life totally changed for me and I am now sure of a plate of food every day, I sleep comfortably and most importantly I go to school. I am in senior three and my favourite subject at school is Religious Education.  I want to be a business man in the future, managing several companies around town.  I want to drive my own car and be able to pass by the streets where I came from.

I have never desired to go back to the streets and I never will. I am moving forward and not turning back to street life.   Thanks to God who has held me and thanks to Abaana Ministries for the efforts they put in.  May the Lord bless the works of your hands. 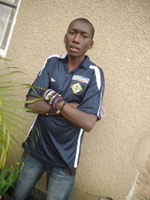 My name is Michael Ssemujju and I am 16 years old.  I was formally a Muslim but I am now a Christian and my name was changed from Bashir to Michael.  My parents died when I was young and I never thought I would be a street child but unfortunately I became one.

I lived in Kyengera, near Kampala city centre, with my Uncle but my Uncle’s wife, my Aunt mistreated me.  I became a house boy instead of being a child at home.  I was threatened and abused when I didn’t do what my Aunt said.  I reached a point where I could not handle the abuse so I ran away to the streets after finishing Primary seven.

Life on streets was not easy; I slept in the cold with no covering.  I booked shades (verandas) for the night as though it was a comfortable double bed and covered myself with torn boxes when I could afford them.  I thank God that I didn’t get involved in stealing or drug abuse although most of my friends did.  I feared that I may be arrested if I did.

I used to sell scrap (old metal) that I collected from around town where I earned 4000 Ugandan shillings (just over £1) on a very good day.  This money was not guaranteed because my fellow street kids would often steal it from me, so I used to buy food straight away with it and eat the food immediately so that it wasn’t stolen from me.

I often thought about God and how He would help me to go back to school.  After one year of street life God was faithful and answered my prayers.   I was given the opportunity by Abaana in 2007 to go and live at Abaana’s New Life Rehabilitation homes and life has never been the same.

I have lots of friends now, I have a comfortable bed, I eat food everyday and I go to a boarding school. I am now in Senior three and my best subject is computer studies.  I want to be an IT manager after my studies.  School is fun..... and I love it!

I now look at my future as a millionaire with a family of three children and a car to drive them to school.   I love swimming and listening to music during my free time but studies comes first.

My future is as bright as the sun.   I know what my future holds because it is in God’s hand.   I am safe with Him.

THANKS TO ABAANA MINISTRIES for giving me my dream.

Created and Designed by RTNetworks

Fast4Africa is run by Abaana - a charity for the children of Africa.
Charity Number XR23 866